Before getting into recipe let me share some news about Jowar.

Jowar: The Indian name for Jowar is Sorghum vulgare , also known as great millet, kaffir corn, guinea corn. They are produced in semi‐arid regions and provide important human food in tropical Africa, central and north India, and China. Sorghum produced in the USA and Australia is used for animal feed. Also known as kaffir corn (in South Africa), guinea corn (in west Africa), jowar (in India), Indian millet, and millo maize. The white‐grain variety is eaten as meal; the red‐grained has a bitter taste and is used for beer; sugar syrup is obtained from the crushed stems of the sweet sorghum.
Nutritional Information: A 200‐g portion is rich in protein, vitamin B1, niacin, and iron; a good source of zinc; a source of vitamin B2; provides 14 g of dietary fibre; supplies 660 kcal (2800 kJ). For more details
Jowar Chapathi: Jowar rotti is very famous in any Northern Karnataka especially in 'Lingayat' house. But I tried Jowar chapathi in the place of Jowar rotti. My family members loved it and i need not had to fight with my kids to try this new chapathi. 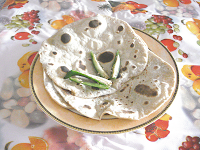 Ingredients
Jowar flour 1 cup
wheat flour 1 cup
Water 1 and more as required to make dough
Salt -1 tbsp
Jeera or cumin seeds - 2 tbsp
turmeric powder - 1/2 tbsp
Method:
Mix all ingredients except water. Then adding little by little water make the dough as soft as your kids cheeks and leave it to settle for an hour.
Then kneed the dough balls to make chapathi. No need to add oil also when making chapathi. If required add ghee for aroma.
Side dish: It goes good with all varieties of gravies and more tasty with Brinjal bhajji

Ingredients: Apple Stuff: Left out apple residue after extracting juice - 1 cup Turmeric powder - 1 tbsp Chilli powder - 1 tbsp salt to taste Chapathi: Wheat Flour - 2 cups Sesame oil - 1 tbsp Salt - 1 tsp Water to knead dough Method: Add salt, turmeric powder and chilli powder to apple residue, mix well and make it into tiny balls. ﻿﻿ Apple residue ﻿﻿﻿﻿ Apple residue with salt, chilli powder and turmeric powder ﻿﻿ Meanwhile, mix oil, salt, wheat flour and adequate amount of water to knead smooth dough. Leave it for an hour. Make equal sized balls, smear them with dry flour and roll them out on a rolling board. Place the apple ball in midst of the rolled dough and cover it with the dough and again smear it of with dry flour on the rolling board. Apple ball placed over the rolled dough Now heat a pan or griddle. Put the parata on it. Moderately roast both the sides of parata on griddle. If required apply some ghee on both sides. smear them with dry flour and rol 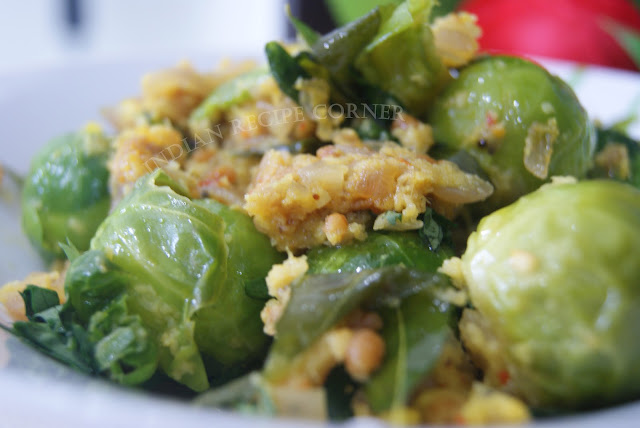 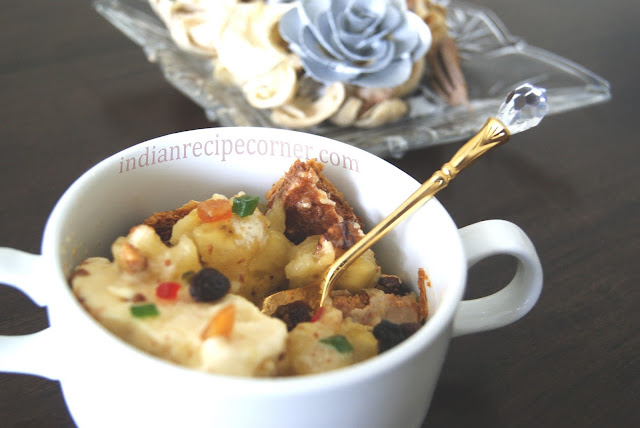 Biscuit cake Biscuit cake is an easy to prepare dessert with little and easily available ingredients. This dessert can be frozen and can be fresh for one week. It is kids friendly and a rich dessert. Ingredients Ingrdients for Biscuit cake Nestle table cream - 200ml Condensed milk - 200ml Biscuit - 50 Fruits mix/ choco chips/nuts for topping Preparation time: 10 mins Processing time: time to freeze Preparation Condensed milk + cream Pour the table cream and condensed milk together in a bowl and beat well to get it evenly mixed. In a cake pan, grease the pan with 2 spoons of beaten milk and layer the biscuits to fit the pan. Spread the beaten milk over the layered biscuits. And continue layering biscuits over the milk spread. Continue it till the prepared mix is done and the cake pan fits it. I have used chocolate flavor of Graham's biscuits. The biscuits can also be opted for Oreo, Chocolate flavored Marie biscuits. Finally go for toppi